Monty Hall by the Numbers By Ray Wallin

I admit that I was at first a bit skeptical of the Monty Hall Problem. After all, I consider myself a sound handicapper. I know where my strengths and weakness lie. I have been a winning horseplayer for years and, while happy to be turning a profit, I am always looking for a way to increase my potential number of plays and profit. How could this Monty Hall analysis help my wagering?

Dave Schwartz's quote in the original video was Concentrate two-thirds of the winners into one-third of your contenders.

First, I took that challenge and tried an online Monty Hall simulator that tracks the results. 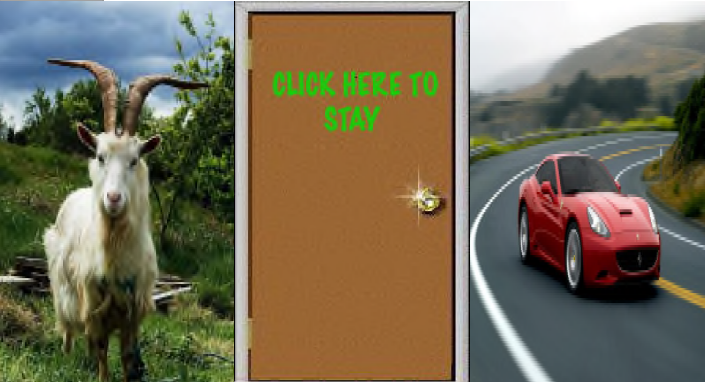 I did 310 trials. (Why did I select 310?  It was about the limit of my clicking the mouse without developing my carpel tunnel syndrome!)

At first, it doesn't sound like it can be possible. How can switching the doors make that much difference?

Many people would reason that there are two doors left and that is a 50% probability that you get the car or 50% that you get the goat. When you think about it though, it really is logical.

When you select the first door, you have a 33.3% chance of being right, meaning that there is a 66.7% chance that one of the two remaining doors is the winner. THAT WILL NOT CHANGE!

Once Monty reveals the goat behind one of the two doors, there is still a 66.7% chance that the winner is not the door originally selected!

So if the optimal Monty Hall should result in a 66.7% win rate, why does the practical application on the actual races result in a lower percentage? The difference is that when Monty opens the door and shows you the goat, this is new and perfect information.

There is no disputing that the goat is actually a goat. In handicapping, you can assign a probability to every horse in the field and, even with throwing out non-contenders, that information is not perfect. The door that you are opening as your goat will carry a probability of winning as will the balance of the field that you have eliminated.

What Factors to Use

Dave is quick to point out several factors that he uses for this analysis, but the key to making Monty Hall work is to avoid using factors that are interdependent. Why is this important? Perhaps you want to use speed figures and a pace figure. Published pace figures are often figured as a result of the speed. In other words, they consider many of the same factors.

What Horse to Select as your Initial Door

Since you are going to switch from your initial selection, it would make the most sense to select the qualifying horse that you feel has the lowest probability of the three to win the race.

For example, based on fair odds that you have assigned to qualifiers leaving you with three horses that you feel should be 2-1, 3-1, and 4-1. This boils down to 33.3%, 25%, and 20%. By selecting the 20% horse as your initial choice, you are then leaving yourself with the highest possible probability of the remaining contenders (58.3%).

Every horseplayer will probably approach the factors that get them to this point differently. For some horseplayers, it may be to use the higher odds horse of the two remaining as their goat. Depending on what factor or method that you used to get the field down to the three contenders, you may elect to use the class, speed, trainer, or jockey information.

I had the pleasure of watching Dave perform his analysis in real time over a webchat. We could never expect the win rates to be approaching 67%, yet he did manage to hit on five of the thirteen races we analyzed for 38.5%. Dave mentioned that he generally levels out at about 35% which is an excellent strike rate considering he can look at just about every race and apply his logic! I am generally happy to have found one or two plays on an entire race card! While 13 races is not enough of a sample size to confirm or deny anything, I decided to give Monty Hall a try using my own set of criteria.

I decided to use the top three of my own pace-based speed rating (PBR) horses as my first handicapping object to get my three contenders. The table below shows the recent performance of my PBR horses. The winner has been amongst the top three selections in non-maiden, non-two year old, and non-turf races about 68% of the time.

The lowest rated of the three was my initial selection. My deciding factor was to use the higher odds horse of the remaining two selections just before post time as my goat.

A 40% strike rate across all races is impressive, especially since the top horse in the original sample of 54 races, only hit 31.3%! This included maiden, two-year-old, and turf races.

There are some of those races where I do have confidence in my selections which reduced that sample size down to 35 horses. The win percentage and return improved.

Those confident races resulted in a win rate of 48.6%, amazingly close to that 45.6% expectation.

Likewise, if I take the full sample and pull out only the maiden, two-year old, and turf races, the sample improved win percentage and showed a profit of 7% on win bets. Taking only the confident races of this smaller grouping produced 28 plays or just over half of the sample. In this case, the win rate improved and the profit grew.

This is a little higher than my normal amount of plays per card which has generally hovered around 25%. If I had used the confident group of races from the non-maiden, two-year-old, and turf group I would have played 28 races (51.9%), or an extra race or two per card on average.

In the sample that Dave shared with me, he also had applied money management tactics in staggering the size of the wager based upon the amount of the eliminated pool. My tables show a straight and equal wager on each horse in each race. It begs to reason that you could further optimize your wagering and profits through practical money management techniques.

Monty Hall is a more powerful tool than I initially thought. The key is to get the right handicapping objects based on either your own handicapping or the recommended objects (if you use Dave Schwartz's products). In some cases the Monty Hall switch horse matched my wager and in some cases it did not. I believe that anyone can incorporate Monty Hall into races where they are confident, that do not warrant a wager using their normal criteria. This will result in more playable races and less missed winning opportunities.

Using the Monty Hall Problem to Improve Your Handicapping

Ray Wallin is a licensed civil engineer and part-time handicapper who has had a Web presence since 2000 through his blog and for various sports and horse racing websites, most recently at USRacing.com. Introduced to the sport over the course of a misspent teenage summer at Monmouth Park by his Uncle Dutch, a professional gambler, he quickly fell in love with racing and has been handicapping for over 25 years.

Ray's background in engineering, along with his meticulous nature and fascination with numbers, parlay into his ability to analyze data; keep records; notice emerging trends, and find new handicapping angles and figures. While specializing in thoroughbred racing, Ray also handicaps harness racing, Quarter Horse racing, baseball, football, hockey, and has been rumored to have calculated the speed and pace ratings on two squirrels running through his backyard.

Ray likes focusing on pace and angle plays while finding the middle ground between the art and science of handicapping. When he is not crunching numbers, Ray enjoys spending time with his family, cheering on his alma mater (Rutgers University), fishing, and playing golf.

Ray's blog, which focuses on his quest to make it to the NHC Finals while trying to improve his handicapping abilities can be found at www.jerseycapper.blogspot.com Ray can also be found on Twitter (@rayw76) and can be reached via email at ray.wallin@live.com.